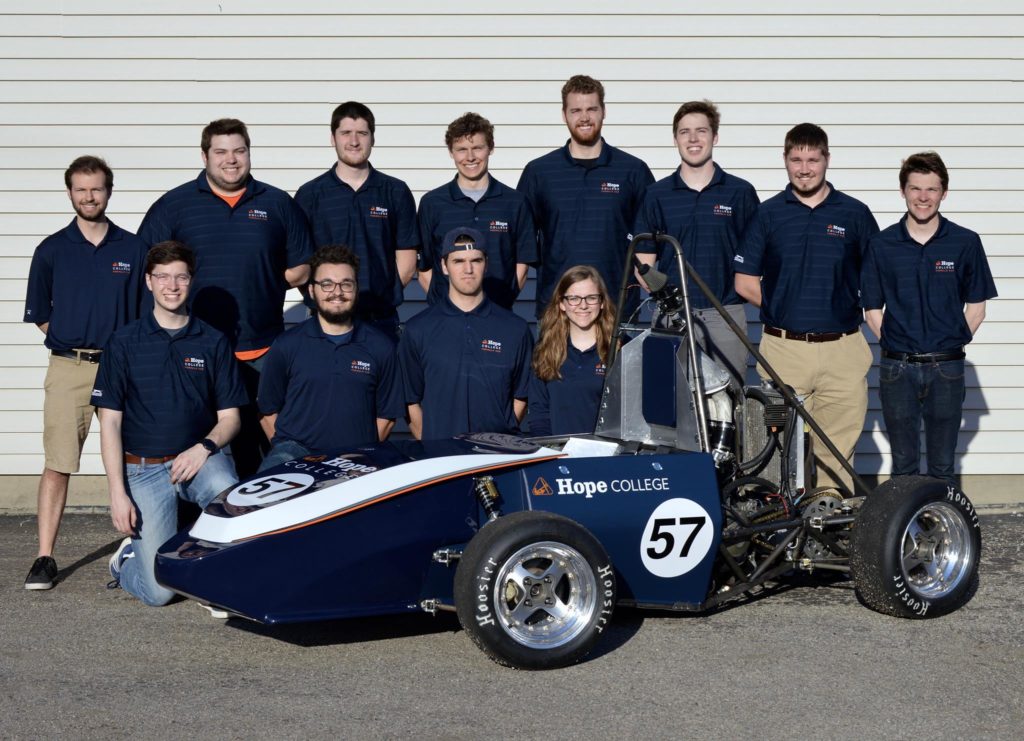 The student-run Hope College Formula Racing Team is in the top 20 percent worldwide in the FSAE rankings posted earlier this year.

Hope College ranked 107th out of 601 teams globally, including 26th out of 145 teams from the United States.  Most of the teams are from comprehensive or technical universities — first on the list, for example, is the Universitaet Stuttgart in Germany.

“This is momentous for not only our team but also for our school,” said freshman team member Austin Cortes of Gurnee, Illinois.  “We are one of two liberal arts colleges in the competition, so we are a true underdog story.”

Looking forward, the team is preparing for this year’s competition at Michigan International Speedway, which will be held on May 8-11 with an estimated 120 teams participating.

Hope first participated in Formula SAE in 2010, competing with more than 100 teams from around the world at MIS.  The college returned to MIS in 2016, and also competed at Lincoln, Nebraska, in 2018.

Hope’s team placed 76th out of 102 teams in 2010, winning the William C. Mitchell Rookie Award in 2010 for having achieved the highest overall score among first time teams, and finished 77th out of 115 teams in 2016.  Hope also finished 11th in the international Formula SAE Lincoln 2018 competition in Nebraska out of 80 teams.  Also in 2018, Hope finished first out of 10 Great Lakes FSAE teams at the 2018 Lawrence Tech Grand Prix, and had the 49th fastest time out of 1,375 entries in the SCCA Solo Nationals autocross held in Lincoln, Nebraska.

The concept behind Formula SAE is that a fictional manufacturing company has contracted a design team to develop a small Formula-style race car.  The prototype car is to be evaluated for its potential as a production item. Each student team designs, builds and tests a prototype based on a series of rules whose purpose is to provide standards while promoting clever problem solving.

The Formula SAE competition is not just a race.  Instead, the teams are evaluated in a series of static and dynamic events, including presentation, design, cost analysis, acceleration, cornering ability, maneuverability and handling, fuel economy and endurance.

The international Formula SAE organization provides a variety of design parameters within which the participants must work, but beyond that the teams make their own decisions.  Some of the parts are pre-fabricated, like the 600cc Honda motorcycle engine that provides the power. Others — like the frame itself — have been developed by the group, starting with initial concept, and then moving through design and theoretical testing using the computer and ultimately to fabrication and construction.

Although it may seem that the team would be geared toward engineering majors, the Hope College Formula Racing Team is open to any student and other majors through the years have included communication, business, computer science, exercise science, management and religion.